I like to start my posts with a picture but today Caty told us a great story I want to share.

Caty has ridden horses since she was a tiny little girl. The farm where she rides is very social with lots of warm, loving people coming and going. Last Saturday she rode with a woman who told the best story.

A week ago she noticed a Dalmatian standing outside her door. She opened the door and made friends with him. He came back the next day and she let him in. He curled up in a ball and went fast to sleep. Two hours later he woke up, went to the door and she let him out. He left and didn’t return until the same time the next day. When she let him inside he again curled in a ball and fell sound to sleep for two hours. Then he woke and asked to go outside. This continued for a week. He became more and more comfortable and was eventually curling up on the sofa, under a blanket, but still only staying two hours. Finally the woman was so curious she wrote a note and tucked it in his collar. She wrote that he visited her home every afternoon and wondered if anyone was concerned about him. The very next day when she let him in she noticed he had a note tucked into his collar. It said, “This is my Dalmatian. He lives with a family of six children all under the age of 7. Obviously he needs the peace and quiet you are offering. Ccan I join him tomorrow???”

Can’t you just imagine this poor dog trying to be a good sport with all those little ones and finally just saying enough.

Now onto the pretty pictures.

Too beautiful to pick

Macy picking the last of the Red Romes. We don’t use the romantic apple picking ladders at our farm. The bucket on the tractor fills in just fine. Although Mace wasn’t sooo sure when her dad told her to just stay in there and he would drive to another part of the tree so she could reach more apples. Glad I wasn’t there to see.

This is how we keep our kids entertained on the farm. 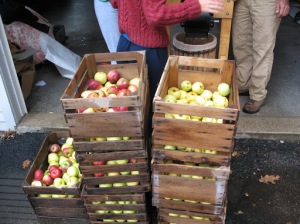 Crates of just picked apples and a cider press. The press takes a fair amount of elbow grease so it is all hands on deck when Dad says it is time to make cider!!! 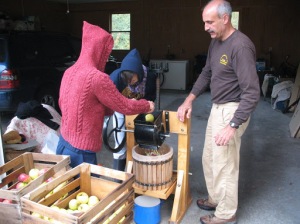 This is the dangerous time when fingers may accidentally be ground with the apples. Mace is tossing apples into the hopper and Caty is grinding away. Caty is more buff and was a super grinder when she spelled her dad. Mace is a wimp in the grinding department. I am docking her pay. 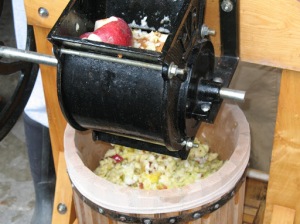 Caty, aka, The Cruise Director, and quiet the fashinista, don’t you agree? (Koigu scarf from at least 6 years ago. Apparently. the classics never go out of style.) 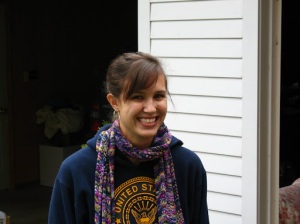 Sneaking bites when she thinks no one is looking. (Did you notice the knits? Central Park Hoodie and a Nordic hat from her childhood that she still grabs in a pinch. Another woman on the cutting edge of fashion. Seventh Ave has nothing on Latrobe.)

We had a banner year for apples. We’ve made 44 gallons of cider, at least a dozen apple pies, various apple crisps, apple sauce and even caramel apples last weekend. I know just how Mrs. Johny Appleseed felt.

How cute is he? Sorry, had to add gratuitous puppy pictures when he is this cute. 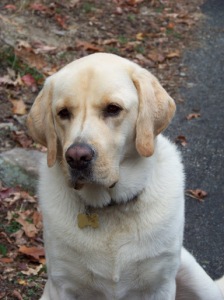 Awwww, the payoff, sweet nectar of the gods. 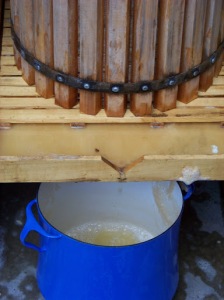 Someone else is very excited about the Azaleas. #bees #gardening #gardensofinstagram #spring2022
Heres a closeup of our new neighbors, last seen in our driveway.
I can grow em but I sure can’t arrange them this well. @macyalessandra has mad flower arranging skills. #springbouquet #spring2022 #mayflowers
Babies loving the baby chicks. #chickens #springchicks
A lovely rainy day deserves a little garden walk about. #gardensofinstagram #gardening #tulips #thoseorangetulips
New family just moved into the neighborhood. She found fish food last night so came back for another meal.